by marianne@cello.no on 9. oktober 2017 in Lene Grenager

The Solo suite was written for me in 2008, to be played together with the Bach solo suite in c-minor, both with the A string tuned to G. This scordatura gives the instrument a darker and richer tone. The Solo suite is demanding and I have worked on it for a long time, and played several concerts. I still have to direct my attention and remind myself of using the body, so that the technically demanding parts do not mess up.

Lene says about the work: “I wrote this three-movement work, Prelude, Sarabande and Gig, inspired by Bach’s 5th Cello suite for unaccompanied cello because these suites are music to which all cellists have a strong relationship. At the same time, my work has a “gothic” dimension, inspired by the writers Charles Dickens, Sir Arthur Conan Doyle, Sarah Waters, and Tim Burton’s animated films. It is dark, English, and cold, possibly in the moor or in the stinking mediaeval town. The people have dirty clothes in many layers and are constantly experiencing the most peculiar things. For me, this is programmatic music with a touch of old fashioned colour”.

In the video below you can see how Lene Grenager and I are working on the Prelude of her Solo suite, recording and discussing interpretation in the process:

I have analyzed the different movements in ways that I feel help my understanding and interpretation. Here are two examples from the Solo suite. First is an interval analysis of the interval relations in the Sarabande. Especially interesting was finding the chords being build up of perfect fourths and tritonus, and using the tritonus as a tension creator. 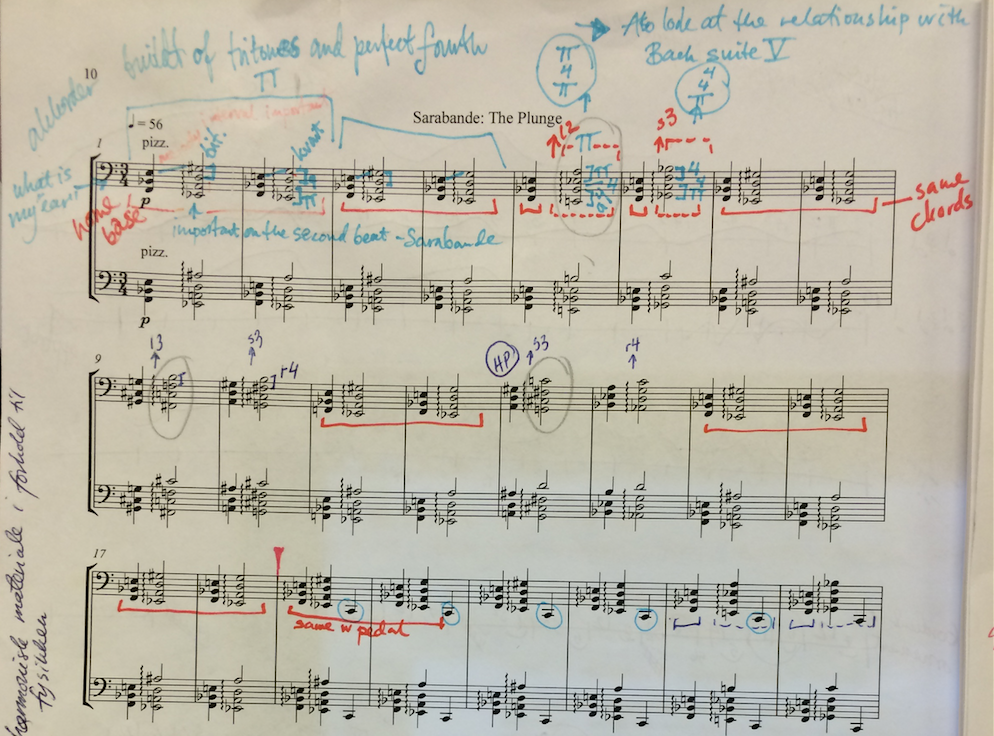 And in the next illustration I have notated the Rondo’s different themes and parts in relation to dynamic development throughout, so I see how the different dynamics and tension relate to each other. For example: The main theme A (red) starts quite strongly in mezzoforte, then gradually descends before a rise in tension, but is at its softest contrasting to the rest of the themes getting stronger and stronger at the end. Theme B (green) oscillates between soft and strong but ends up with two strong statements. Theme E (yellow) keeps a steady rise through the whole form. The themes vary, but as an overall form it gives a feeling of a gradual crescendo. 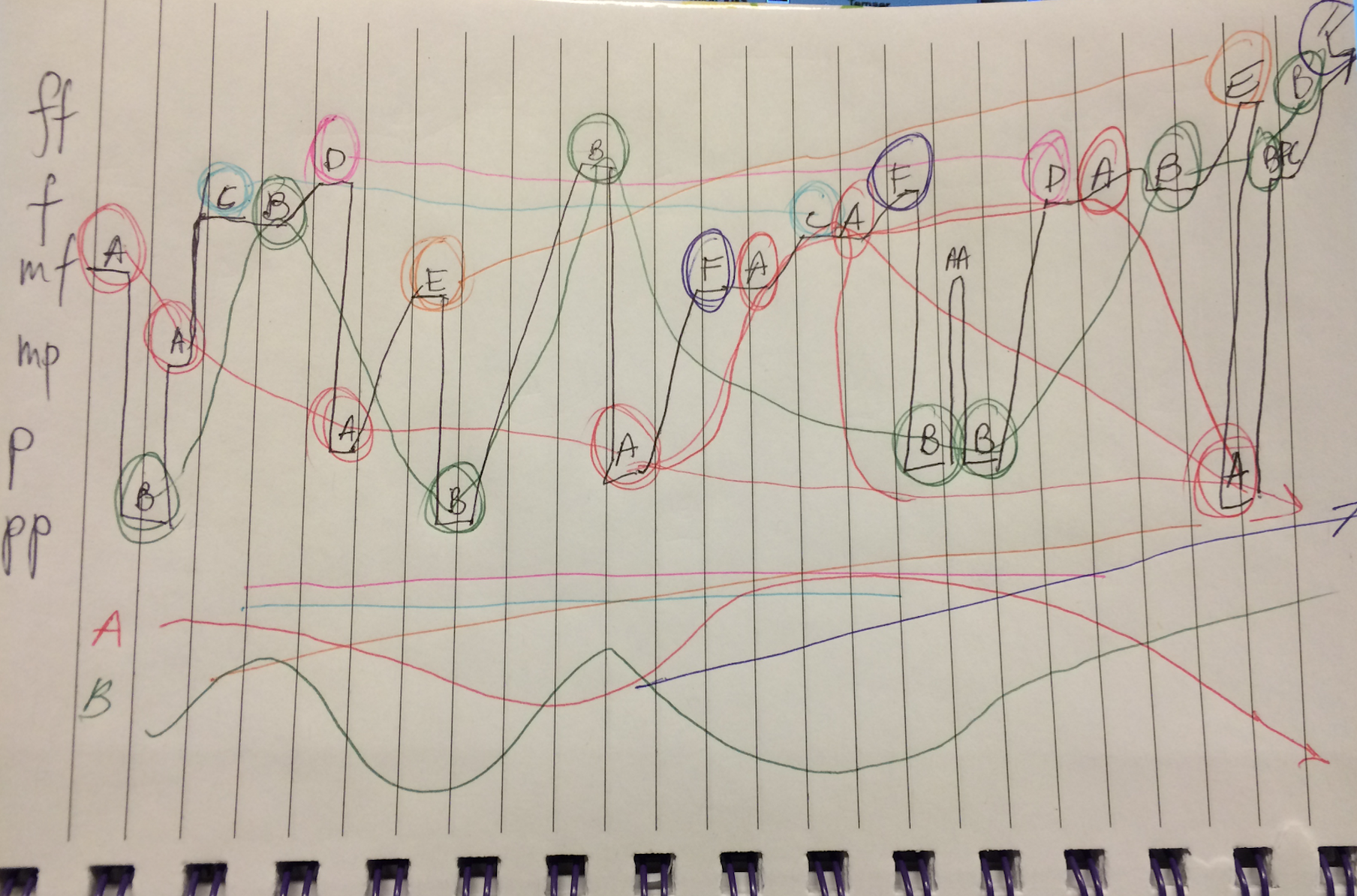 Tryllesangen is based on the book «Josef and the Magical Fiddle» by Janos. The book tell the story of Josef who is tiny, but can play a magic song on his fiddle which, when played forwards, makes people grow bigger and feel happy.

The tune can also be played backwards, which has the effect of shrinking those who hear it.

Lene Grenagers Tryllesangen is a very rhetoric work. Or it is easy to imagine the music describing the fairy-tale the work is built upon. An example is when the boy is riding on his enlarged ant, the ride is bumpy, but you cannot avoid it with so many feet. It is characterized by the uneven time signatures and the large intervals:

Another example is the army chasing them, and getting closer and closer (crescendo), while they try to escape (bar 3-5): 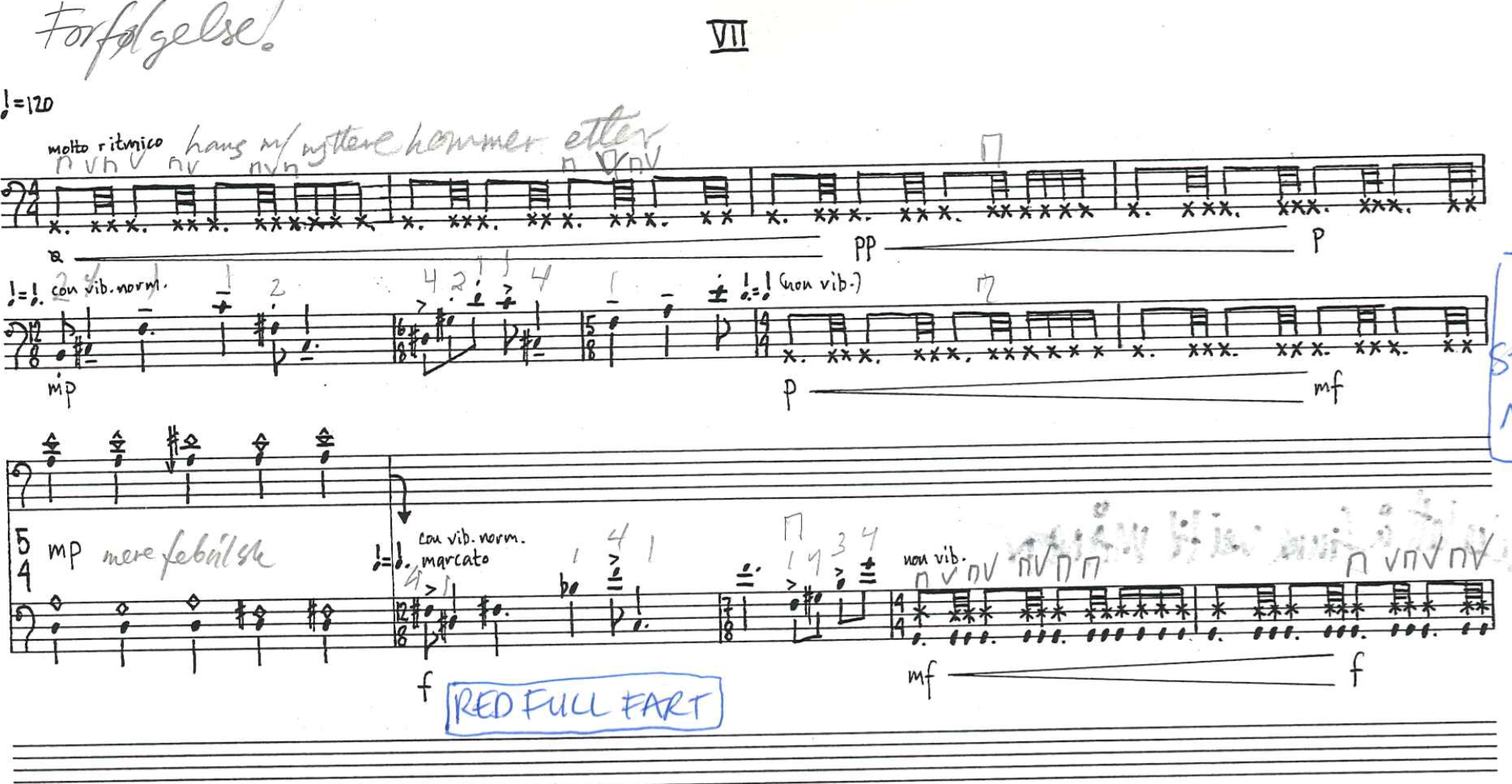