The language in which musical ideas are expressed in tones parallels the language which expresses feelings or thoughts in words ((Schoenberg, A. (1984). Style and Idea: Selected Writings of Arnold Schoenberg (L. Black, Trans. L. Stein Ed.). Berkeley and Los Angeles: University of California Press, p. 399.))

“Prosody, not syntax or grammar, is the bedrock of musical comprehensibility” says Pedro de Alcantara ((de Alcantara, P. (2010). Integrated Practice: Coordination, Rhythm & Sound. Oxford: Oxford University Press, p. 6.)). According to Lodato and Urrows, Lawrence Kramer describes and also comments on the lack of scholarly interest in this particular aspect of music as speech:

But one of the most common types of relationship is more virtual than actual. It happens when music itself ‘speaks’: that is, when a musical phrase associated with certain words is used motivically, but without the words being either uttered or sung. Such ‘speaking melody’ is songlike but not song, not speech but still speechlike; there is nothing else quite like it. The melody, precisely, does not sing; it speaks, and what it says is definite and understood, as if a virtual voice had uttered the substance of the words without their sound. Speaking melody is a device basic to accompanied song, to musical theatre, and even to instrumental music, but there has been virtually no theorizing about it”((Lodato, S. M., & Urrows, D. F. (2005). Essays on Music and the Spoken Word and on Surveying the Field. Amsterdam: Brill Academic Publishers, p. 127-144.)).

Prosody varies according to which language it belongs to, even different dialects have a particular prosody: for example, in French you allow fluctuating stresses, in English mostly fixed stresses ((de Alcantara, P. (2010). Integrated Practice: Coordination, Rhythm & Sound. Oxford: Oxford University Press, p. 23)). This can be seen in relation to the music written in these countries, but this is material for another study. The idea of music as prosody does not require that a particular language’s prosody be transferred to a particular phrase of music. Music is a language of its own, with its own prosodic quality. Much like listening to a language you don’t know: you cannot a priori understand the semantic meaning of what you hear, but you know that it means something. A good example of this feeling of sense through prosody, can be seen in Christian Morgenstern’s nonsense poem Das große Lalulä from 1871:

In my project, I can only look at a tiny selection of the vast amount of contemporary art music and try to create this feeling of sense. I also work with improvisation and mixing genres, but in this project, I have limited the works to those composed by living Nordic composers writing score works in the classical art music tradition.

It is not my aim to interpret contemporary music with baroque phrasing, but I am inspired by the idea of articulating music as language, like prosody. Of course, the manner in which I decide which articulation to use is grounded in the composer’s voice, style, language and the style of the work. Like Pedro de Alcantara says in his Integrated Practice: “Every linguistic aspect of music can and must be made clear in performance”, and “to make music is to tell stories” ((ibid, p. 5.)). Imperative to the discussion is an awareness that not all music can or should be interpreted prosodically. Even within the same work, the music can be both more atmospheric and not “spoken” and have more rhetoric-type phrases.

This concept of language and music is clearly not revolutionary, but as a performing tool, it has faded out of use over the past two hundred years. Music has lost its out- spoken connection to language and to the rhetorical figures, but it is still a language of its own. This inspiration carves out a space for a significant amount of freedom and personality in the moment of performing. De Alcantara suggests: “[It’s] by sensing the passage’s linguistic construction and its propulsive prosodic pulls that you can best perform it” ((ibid, p. 57)).

Casals talked about the natural laws of music, and his second, third and fourth principles reflect an understanding of the performing ”rules”, which seems to have similarities to these rhetoric rules and performing practice. Furthermore, of one of Casals’ teachers at the Madrid Conservatory of Music in 1895-1900, Jesús de Monasterio, who exerted a great influence on the young man, Casals said: “[T]he laws of music – for him, music was a language with similar laws of accent and values and constant variety” ((Casals, P., & Kahn, A. E. (1970). Joys and sorrows : reflections by Pablo Casals as told to Albert E. Kahn. New York, p. 62)).

In prosodic articulation and organisation, and also in the rhetoric theories, the rhythmic grouping of a foot in verse is very important for the way in which the music is performed. It is also called the rhythm of poetry. You have, for example, the iambic foot: short long, and the trochaic foot: long short, dactylus: long short short, spondee: short long long and many more. Pedro de Alcantara, stressing the importance of prosodic accentuation for interpretation of music, has created a comprehensible model with the following illustration of three prosodic systems ((de Alcantara, P. (2010). Integrated Practice: Coordination, Rhythm & Sound. Oxford: Oxford University Press, p. 30)).

Beethoven was concerned with using the accentuations of the art of verses, both as a composer and as a musician. It is very interesting to see in the book of 21 Etüden für Klavier from 1887 by Johann Baptist Cramer, where Beethoven writes advice to his nephew on articulation in performance ((Cramer, J. B. (1974). 21 Etüden für Klavier, nebst fingerübungen von Beethoven nach seinem Handexemplar. Vienna: Universal Edition AG.)). In etüde number five he says14: “[…]the first note of each group should nevertheless be accentuated and held. The middle voice […] must not be attacked with the same strength as the upper voice. The measure shows itself to be trochaic. Beethoven (p. 10). Another example is in etüde seven: “Here, the 1st and 3rd notes of each group lead the melody (in Trochaic verse)” (p. 14), and in etüde fifteen: “the melody is in the highest notes. The accentuation is roughly the same as the scansion of the iambus”.

In language we speak with different rhythms and articulation. This is the same in music, and this is also a crucial aspect of creating a personal and freer interpretation. Of the verbal basis of the music, the rhythm and the way in which we articulate, is maybe the most important. De Alcantara has made a comprehensible model to aid in understanding the different accents ((de Alcantara, P. (2010). Integrated Practice : Coordination, Rhythm & Sound. Oxford: Oxford University Press, p. 61.)). The figure below illustrates how the metric stresses create differences in articulation within a bar or a melodic line: 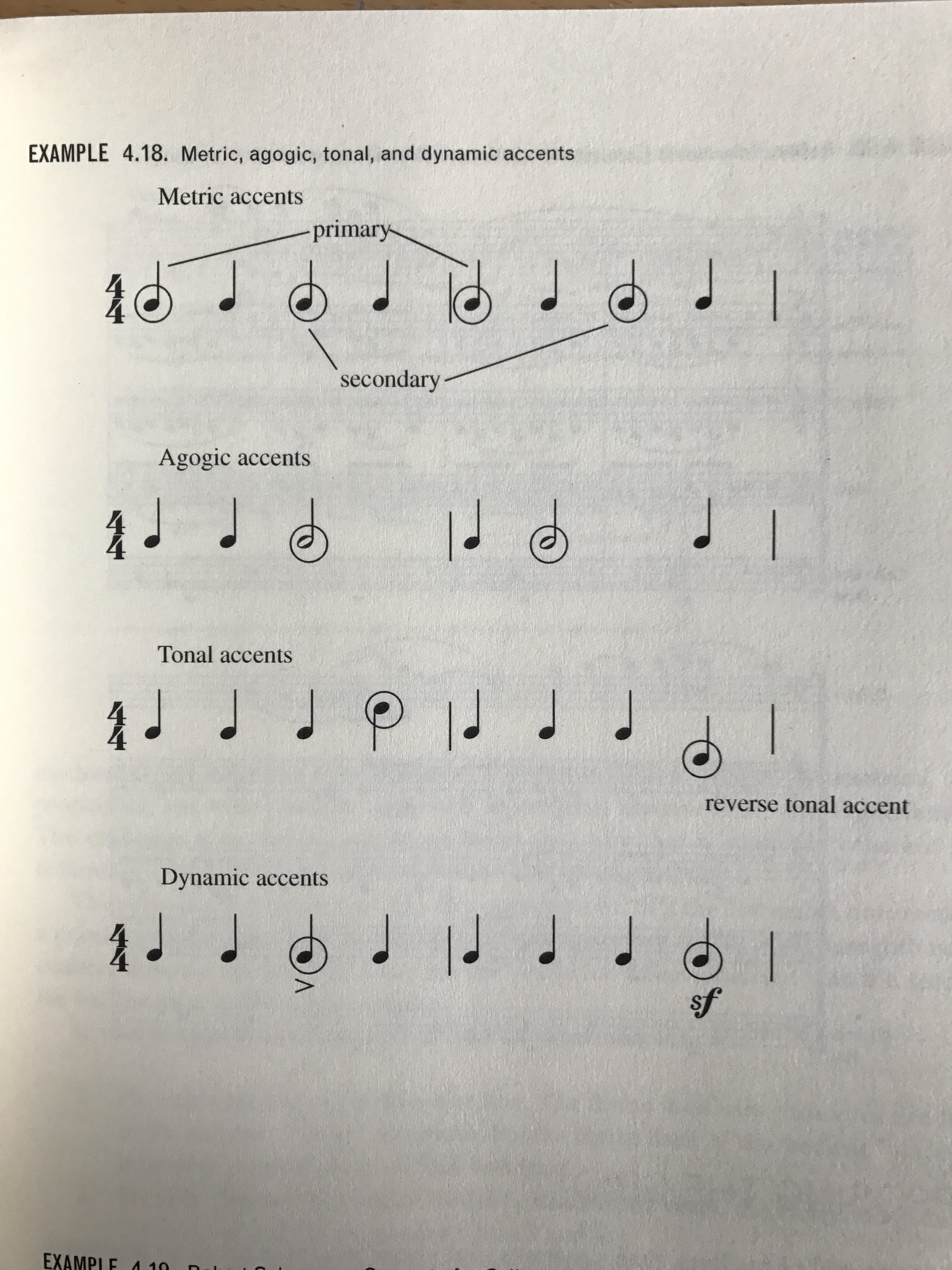 Metric accents, 1, 2, 3, 4 1 is the heaviest articulated, then 3
Agogic accents – articulation of the longer note within a passage

For examples of my use of this thought in interpretation, go here