In my project, I have performed contemporary works and reflected upon my artistic practice in order to make the processes and insights accessible to a wider audience. This is presented in a written reflection, with this website exposition showing a shortened presentation of my artistic research project, with video and sound examples, as well as the three final artistic presentations realized in November 2017. The intention is for these three parts to complement each other, but also to be experienced separately.

My project arose from lived musical experiences and from the feeling that I was working on something important in performing, for both musicians and audiences. I have throughout the project aimed at developing my musical performance and tacit knowledge, broaden and contextualize my artistic research and performances in an international context, and to contribute to new knowledge about interpretation, embodiment and presence from a performer’s perspective. My initial research question and research aims have been guides and sources of motivation throughout my project and have helped me define the parameters of my research. I have built my reflections on and around concepts related to these aims as tools for understanding and artistic development.

This project develops strategies for performing contemporary music, strategies that are inspired by  rhetoric performance practices, the creation of presence in performing, and how to use such practices to become a freer interpreter of contemporary music. The artistic research project is by nature a multi-faceted endeavour and has led to the creation of both several music performances, a written reﬂection, this project website and a CD. The project created an intriguing laboratory setting in which my contemporary music performance could be continually thought and reworked. The title Making Sense refers to my intention to create an embodied feeling of sense through my performances both for performer and listener, without a logocentric meaning 1)Deleuze, G.(1990). (C. V. Boundas, Trans.) The logic of sense. London: Athlone Press..

How can I perform contemporary classical music to communicate more directly with the listener, by working with presence as a performer, and using prosody (the melody and rhythm of the language) as an inspiration for performance?

My main research aims have been:

I see presence in performance as a special quality, which I discuss further in my written reflection, which you can download here as a pdf: makingSense

Writing gives an explicit verbal account of the implicit knowledge and understanding embodied in artistic practices and products, while at the same time art may escape or go beyond what can be expressed by words and resist (academic) conventions of accountability. In my work this part of the reflection is answered through my performances, but I find that writing is actually also an important part of my development as an artist, since thoughts become clearer in the process of explaining and describing. My writing communicates my reflections on working with artistic development. Language has become a key to communicate the thoughts and processes of a performative inquiry, as conceptualized by Lynn Fels, Assistant Professor at the Faculty of Education at Simon Fraser University in Canada:

Performative inquiry does not provide a method nor steps to follow, but rather offers researchers and educators a way of inquiring into what matters as we engage […] in any creative process or activity that is an action site of inquiry. Performative inquiry embodies mindful attention, creative and improvisational interactions, and reflection as a way of being in inquiry 2)Fels, L. (2012). Collecting Data Through Performative Inquiry: A Tug on the Sleeve. Youth Theatre Journal, 26(1), 50-60. doi:10.1080/08929092.2012.678209, p. 3.

My reﬂections have been developed from a performer’s perspective; I have worked with both embodied knowing with my instrument and cognitively with interpretation and the performer’s development. Most music research has previously been written from the listener’s perspective: that of the musicologist, the critic-analyst and the audience. According to philosopher Lydia Goehr, research from the performer’s perspective, “inside-knowing”, rather than knowledge, remains undertheorized 3)Goehr, L. (1998). The quest for voice: on music, politics, and the limits of philosophy : the 1997 Ernest Bloch lectures. Oxford: Oxford University Press.

Since the 1990s however there has been increasing attention of performative aspects and performance of music, from both musicologists and artistic researchers 4)Abbate, C. (2004). Music-Drastic or Gnostic? Critical Inquiry, 30(3), 505-536. doi:10.1086/4211605)Gabrielsson, A. (1999). Studying Emotional Expression in Music Performance. Bulletin of the Council for Research in Music Education, 47-53 6)Le Guin, E. (2006). Boccherini’s Body : An Essay in Carnal Musicology. Berkeley, California: University of California Press 7)Vincent, M. (2011). Moving to Become Better: The Embodied Performance of Musical Groove. Journal for Artistic Research(1).doi:10.22501/jar.11612. The Society of Artistic Research, SAR, founded in 2010, has created the Research Catalogue, a database for archiving artistic research, and Journal of Artistic Research, where one can ﬁnd increasing numbers of performative inquiries. A recent example is the project called “The Reflective Musician” at the Norwegian Academy of Music, led by Darla Crispin and Håkon Austbø. Their project aimed to “transcend the conformity in musical performance.” Austbø claimed that introspection may be on the rise, stating that “Thanks, in part, to developments within Performance Studies and Artistic Research, more musicians are beginning to look under the surface of their activity, searching for the deeper forces at play in the works they perform” (Austbø & Crispin, 2016). Austbø and Crispin also calls for the criteria of a personal and unique performance to be valued higher than the performer’s knowledge of a given composer’s intentions, the adherence to a particular style, musical structure, historic rules, correct notes — and any other dimension that amounts to following the dominant tradition. “The Reflective Musician” sheds light on this particular dilemma in music from several eras, and on suggestions as to possible solutions.

In my project, I studied these questions through one performer, myself, and give a reﬂective account of the lived experience of developing as a performer while broadening my knowledge through artistic research. My study accounts for the speciﬁc ways in which meaning is created as interaction between performer, embodiment, and audience, and opens up space for a more subjective type of reflection than traditional scientiﬁc research allows for. With this in mind, I could say that I have attempted to explore the world of musical performance rather than explain it.

This artistic research project has been inspired by music- as-speech. I aim to develop a more internally controlled playing, and to use affects as a sort of artistic “raw” material for expression, in other words, to develop “the psychophysical musician”8)Zarrilli, P. B. (2009). Psychophysical acting : an intercultural approach after Stanislavski. London: Routledge.. When I talk about affects I see them as autonomous intensities in the body, independent of our conscious self and happening before our feelings 9)Deleuze, G., & Guattari, F. (1987). A thousand plateaus : capitalism and schizophrenia. Minneapolis, Minn: University of Minnesota Press..

I think of the embodied affects in the music as being not the actual notes on the score nor the personal feelings of the performer, but rather a use of the raw material in ourselves in the interpretation of the music. Jane O’Dea describes it as: ”[…] not  their own personal emotions, but the expressive content enshrined in the score” (O’Dea, 2000, p. 57). As the performer I am not trying to add my feelings to the expressions of the music, but use these embodied affects as a resource in the performance.

I outline, explain and show a means by which this can be realized. In order to do this, I open the space before and after the musical performance through reﬂection on the complex process of preparing a work for concert: from practice, rehearsals, and musical analysis of the works, to what happens during the performance.  I hope to awaken an interest in both performer and listener of contemporary art music with respect to the musician’s role and the psychophysical inner work of the musical performer. 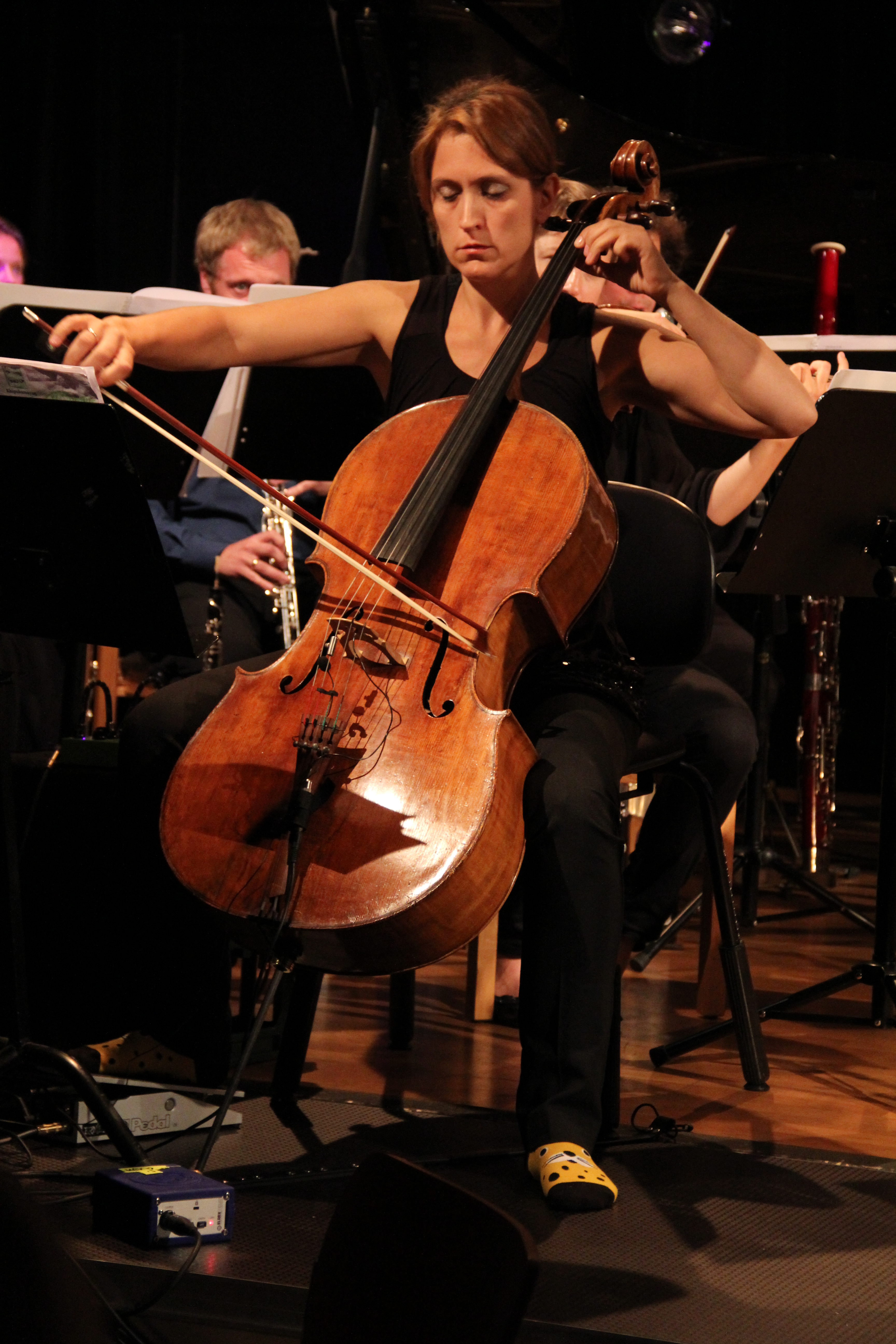 Finally, as a part of the ﬁnal artistic presentation is the CD-recording Khipukamayuk with three works by Lene Grenager, (Øra Fonogram, 2016) displaying selected works by the same composer with whom I have worked during this project. The project concludes with three concerts in November 2017 presenting Nils Henrik Asheim’s Cellostories, Tryllesangen
by Lene Grenager, To F by Maja Solveig Kjelstrup Ratkje, Many Thousands Gone, commissioned work for cello and voice by Ellen Lindquist, one movement from Concertino piccolo per violoncello et voce by Eirik Hegdal and Karin Rehnqvist’s In Orbit as well as Ulvedrømmer, by Lene Grenager and myself.

I can utilize my reﬂections to move beyond and to acquire a deeper insight into the questions of interpretation, tacit knowledge and presence in performance. My intention is also to deepen my process of reﬂection through writing, and to explore how what I found on the way, might be fruitful for the project.

Under the heading REFLECTIONS AND HAPPENINGS  you will find a selected collection of videos from practicing and concert, consisting of some of my empirical material illustrated with video and audio excerpts: reflections, reconstructions of parts of lessons based on my notes, analysis of concerts, works with composers and happenings. Some reflections are very brief, just a thought or a question, while others are more elaborate and also includes analysis of some of the works. I am mostly concerned with the three main concerto works by Lene Grenager, Nils Henrik Asheim and Jon Øivind Ness, but there are also some reflections on other works or processes.

Interview with me on my project (in norwegian):
Finner flyten mellom musikk og språk